Green strides to a social movement

AddThis Sharing Buttons
The importance of forests and tree planting initiatives has started gaining momentum both at national and global levels. With various initiatives like the recently launched ‘One Trillion Trees’ initiative of the World Economic Forum with UNEP and FAO, the ‘Bonn Challenge’ of Germany and International Union for Conservation of Nature (IUCN), ‘Plant a Billion Trees’ of Nature Conservancy and ‘Billion Trees Tsunami’ of Pakistan, the efforts across the globe are intensifying to increase the tree cover, both for the restoration of degraded forests and to increase the carbon sequestering capacity.
In recent years, concern for the environment has increased tremendously among various stakeholders as reflected in the form of various missions, visions, flagship programmes, etc, both at the State and Central levels. The Indian government under the Paris Climate Agreement has also pledged to increase its forests by 95 million hectares by 2030.
Apart from its regular tree programmes, various States have also initiated tree-planting programmes. Maharashtra’s plan of planting 330 million saplings and Uttar Pradesh’s plan of planting 220 million trees during 2019 and Madhya Pradesh planting 66 million trees in one day during 2017 are a few such programmes. However, sometimes these programmes are either temporary, cosmetic or have a low shelf life due to absence of necessary wherewithal like policy support, financial backup and institutionalisation to ensure their sustenance and continuance in the long run to achieve the desired goals.

Telangana also launched its prestigious flagship programme ‘Telangana Ku Haritha Haram’ (Green Garland of Telangana) in 2015 to increase the green cover of the State from the existing 24% to 33% with a target of planting 100 crores trees inside forests and 130 crore outside forest ।ands. With catchy and effective slogans like ‘Vanalu Vaapus Rawali, Kothulu Vapus Powali’ (rains should come back and monkeys should go back to forests from cities), which linked the interdependent problems of deforestation and monkey menace, Chief Minister K Chandrashekhara Rao succeeded in motivating people on environmental concerns, including tree planting.
Contrary to the conventional practice of entrusting the responsibility of tree planting to the Forest department, for the first time this onus has been distributed among all the government departments, thereby bringing a sea change in the attitude of the officials. This was supported by required monitoring interventions, active participation of all departments and strict implementation to ensure more planting outside forests.
Frequent monitoring at various levels, active involvement of public representatives and implementation with various ingenious ways by the field functionaries have resulted in the successful implementation of the programmes. Linking tree planting programmes with wage/livelihood under various schemes and incentives could result in wide acceptance and popularity of Haritha Haram.

Degradation of forests is one of the major challenges of forest management. As per the Forest Survey of India, 2019, Telangana has 10.18 lakh hectare of open forests with tree density ranging between 10% and 40%. These forests are more or less degraded due to various reasons, including climate change. The government has accorded equal priority to rejuvenate degraded forests by adopting the strategy of protecting them from fire and going in for biotic interference supplemented with silvicultural interventions for new growth.
The importance of this intervention can be gauged from the fact that the Chief Minister himself undertook a field visit of degraded forests being tackled under the Assisted natural regeneration (ANR) model, under which so far 2.45 lakh hectare has been treated. With the provision of required infrastructure, manpower, supportive legal provisions and the recent addition of Rs 3,110 crore under the Compensatory Afforestation Fund Management and Planning Authority (CAMPA), comprehensive development of forests is under way including new priority areas like urban parks. 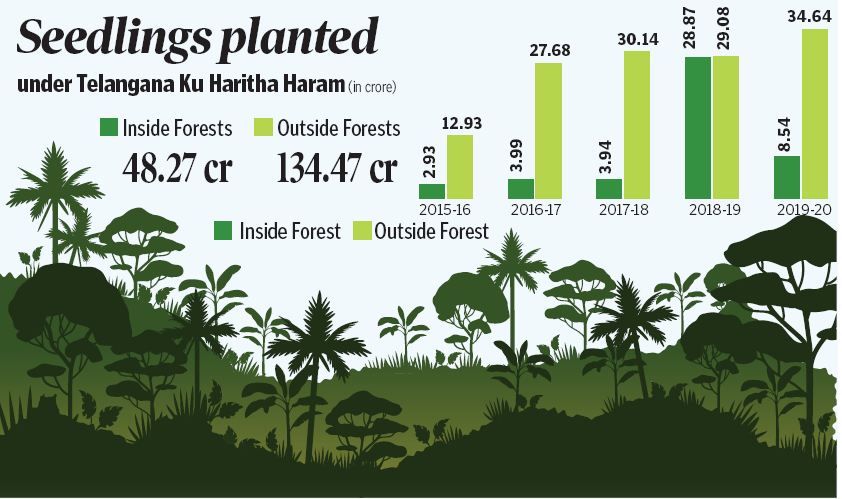 Rapid urbanisation at the expense of agricultural and natural land cover has an adverse impact on the health and psychological well-being of citizens, ecosystem and cultural associations. To meet the ever-increasing challenges of lack of green space and responsibility of providing ecosystem services to society, especially in urban areas, the government has identified 129 locations covering 64,000 ha and so far, 32 locations have been opened for public, a majority of which is managed by the forest department.
From this year, the government is planning to develop 95 urban parks throughout the State. Besides helping achieve the long-term objective of climate resilience, these parks are filling the much-awaited gap of decreased green cover outside forest areas.

Since the beginning of the programme, the necessity of raising green cover with the active involvement of people has drawn the attention of policymakers resulting in prioritising and focusing more on outside forest areas followed by suitable policy and legally supportive provisions. Be it institutional planting by different departments in school premises, bund of agricultural fields, lands of toddy tappers’ societies, lands of religious institutions or rural and urban highways, sufficient provisions were made to ensure both money and material to tackle areas under afforestation programmes.
To ensure accountability and ease of monitoring of the progress of plantations, technological tools like geotagging is also being used. Since launching of the programme in 2015, so far 182.74 crore seedlings (134.47 crore outside forest areas and 48.27 crore inside forests) have been planted all over the State till March 2020 involving all stakeholders.

The landmark policy initiatives of the government to accord priority to the environment in the recently amended PR Act and Municipal Act are worth mentioning. Aimed at entrusting roles and responsibilities among panchayats and municipalities for planting and protection of trees, their survival (85%) and with a provision for the green fund, these proactive policies and legal interventions, coupled with institutional and financial support, show a strong political will, care and concern for the very neglected sector of the environment. These are bound to change with the active participation of all stakeholders at the grassroots level.
The target-oriented strategy of Telangana Ku Haritha Haram can help address the environmental challenges in an integrated manner with gradual policy support accompanied by financial and institutional interventions. These interventions with strong political will, concerted persuasion and focus over a period of time are succeeding in transforming the target-oriented approach into quality-based initiatives, leading to a social movement.
(The author is Additional Principal Chief Conservator of Forests, Telangana)
as appeared in TELANGANA TODAY
https://telanganatoday.com/green-strides-to-a-social-movement