One of the pollutants of recent origin, which is  also called as soot or tar,  the Black carbon (BC) is  a product of incomplete combustion of coal, diesel, biofuels, and biomass and the most strongly light-absorbing component of particulate matter (PM). “BC is emitted directly into the atmosphere in the form of fine particles (PM2.5)”.BC is defined as “a solid form of mostly pure carbon that absorbs solar radiation at all wavelengths”.
The various sources of black carbon emissions  are as follows.
1.    42% Open biomass burning (forest and savanna burning)
2.    18% Residential biofuel burned with traditional technologies
3.    24% Diesel engines for transportation and industrial purposes
4.    10% Industrial processes and power generation, usually from smaller boilers
5.    6% Residential coal burned with traditional technologies


Reducing black carbon can contribute to numerous sustainable development goals, such as cleaner and healthier air, food and water security, reduced mortality and the mitigation of climate change and its impacts. AS per one study it is stated that significant global reductions in black carbon and other short-lived climate pollutants can slow temperature rise by as much as 0.5°C by 2040, and slow the rate of Arctic warming by as much as two-thirds by 2040. 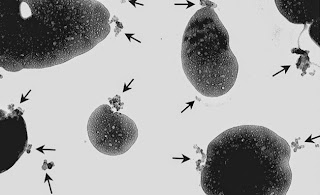 (Sulfate and black carbon aerosols are visible in this image from an electron miscroscope. The arrows point at small clumps of black    carbon attached to the larger sulfates. Credit: Arizona State University/Peter Buseck)
While targeting for reduction of Black carbon it must be noted that unlike CO2 and other GHGs, Black carbon is not an essential byproduct of current sources of energy and its existence as the byproduct of inefficient combustion is notable which makes the task of  Black Carbon reduction more   appealing then the CO2 , mitigation of which requires cutting back on energy consumption in part and Black carbon  can be reduced without necessarily limiting the underlying emissions-producing activity. This feature has more advantages specially in developing countries where people are reluctant to adopt measures to address emissions that historically have come largely from developed countries and BC mitigation would not prohibit the underlying emission causing activity and would reap immediate benefits for local public health and address regional warming and glacier melt.
There is need to have effective policy interventions mostly by ensuring the implementation of existing norms or by amending the existing ones if need arises on following areas to reduce the impact of Black carbon.
1.    For diesel related emissions regular vehicle emissions tests, retirement after certain  age , or retrofitting (e.g. adding particulate traps  including penalties for failing to meet air quality emissions standards, and heightened penalties for on-the-road "super-emitting" vehicles).
2.    Banning or regulating the sale of certain fuels and adulteration  and promote  ultra-low sulfur diesel (ULSD) with improved engine technology.
3.    Restriction in the  use of chimneys and other forms of biomass burning in urban and non-urban areas;
4.    Permits to operate industrial, power generating, and oil refining facilities and periodic permit renewal and/or modification of equipment duly adopting latest pollution control technology.
5.    Mandating use of filtering technology and high-temperature combustion (e.g. super-critical coal) for existing power generation plants, and regulating annual emissions from power generation plants. Moreover as stated by Hansen  “technology is within reach that could greatly reduce soot, restoring snow albedo to near pristine values, while having multiple other benefits for climate, human health, agricultural productivity, and environmental aesthetics. Already soot emissions from coal are decreasing in many regions with transition from small users to power plants with scrubbers.”
6.    Improving the efficiency of brick making which is  one of the  major   sources of emissions and there is scope  with substantial opportunities for engagement with kiln owners and operators, who remain largely unaware of the financial co-benefits associated with improved firing efficiency .
7.    Improving public and private fleet (Heavy Truck) efficiency and management, which includes improving fleet efficiency and management. Though it may not be possible for many developing countries to ban older, heavy-polluting diesel vehicles, and there is need to encourage interventions for Engine retrofits such as diesel particulate filter (DPF) which can be inserted as part of the vehicle's exhaust stream and can be used in both on- and off-road vehicles.
8.    On domestic front replacing or Improving the efficiency of cook stoves since the impact of replacing biofuel cooking with black carbon-free cookers (solar, bio, and natural gas) in South and East Asia is dramatic as per studies done by Ramanathan.
9.    There is a greater need for various sectors including Government to come together on a common platform to address the issues concerning economic development and environment protection, which includes health protection. Though primarily we can make  energy sector as major contributor for more than one-third of the global primary energy consumption and energy-related carbon dioxide emissions and which  has the technical potential to decrease its energy intensity by up to 26% and emissions by up to 32%. To achieve this target improving energy efficiency is one of the most cost-effective measures in countries like India to loosen the link between economic growth and environmental degradation.
10. The Information and Communications Technology industry can play a key role in enabling a low-carbon society by providing standardized information on energy consumption and emission across sectors, as well as capabilities and platforms to improve accountability in energy use and carbon emission. By replacing goods and services with virtual equivalents and by providing technology to enable energy efficiency, ICT industry has the potential to offer innovations that will capture energy efficient opportunities across industries including commercial buildings and homes, logistics and transport, power and manufacturing.
11. India has about 11 million Micro Small and Medium Enterprises and most of them may not have the capacity or capital to implement sustainability in their businesses and if provided required support these can also assist in protecting environment while pushing for higher growth targets in sustainable manner.
12. There is need to decouple production systems from the consumption of materials and energy (produce more with less) to become sustainable for the all Corporations by following steps like switching from non-renewable to renewable sources of energy and materials targeting cleaner production, maximizing recycling and reuse of wastes and environmentally sound product design, enterprises can significantly work towards sustainable growth.
13. The role of local administrators including NGOs, citizen groups and  citizen who are the real change makers at individual level to adopt the green , low energy intensive technologies aiming to reduce carbon emissions need to given due weightage .