As per the latest estimates, 53% of Indian population ( app 600 millions) defecate in open, out of which around 70 % reside in rural areas while around 18.6 % in urban areas. These facts reflect the seriousness of this neglected issue of open defecation which is one of the root causes of various life threatening diseases like GE, Malaria, Jaundice etc. This is also important that poor sanitation, which affects the health of individuals resulting into malnutrition, finally lead to loss of productivity. Apart from this every day around 1000 children below 5 years die due to diarrhea and other sanitation related diseases. There had been attempts by the Government to tackle the problem of sanitation some time in a routine manner and sometime in the form of specific schemes but these attempts failed to achieve the desired success. During 1986 government launched Central Rural Sanitation Programme (CRSP) to improve the quality of life of the rural people and also to provide privacy and dignity to women. This programme was later changed to “Total Sanitation Campaign” (TSC) in 1999 and later on it was termed as “Nirmal Bharat Abhiyan” to eradicate the practice of open defecation by 2017. However the desired results were not received in spite of all big claims and projections. Now the government has again restructured it as “Swatch Bharat Mission” or “Clean India Campaign”. In order to make all such programme effective and to meet the desired objectives, there is need to integrate following issues which have affected the success of all such programme in the past.

2.     The fact that 66 % of the Indian households do not have the access to drinking water from treated tap sources while around 80 % devoid of closed drainage connectivity for discharge of waste water, availability of water is one of the major factors that affect any programme considerably which are aimed at optimum sanitation and maintenance of hygienic living conditions. These two factors hence need adequate consideration and concerted efforts. 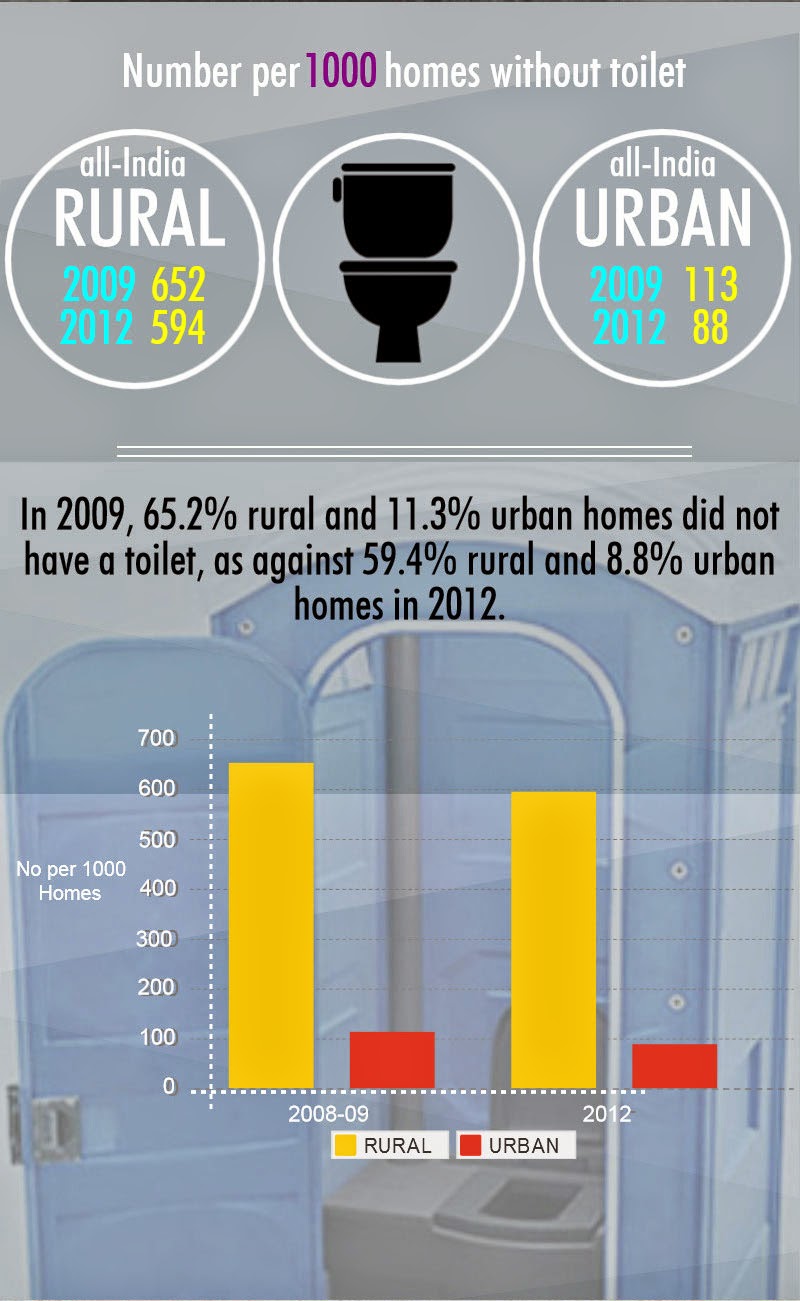 3.    Construction of sanitary toilets is one of the integral components of housing programme hence integration of housing, water and sanitation can act as effective strategy. Alternatively allotting these three departments to one ministry at government level can considerably help in ensuring integration, convergence and effective implementation.

4.     As the open defecation and other sanitation related activities are directly related to health of the individual there is need to involve the primary health department in the programme so that the proper integration is ensured.

5.     Effective mechanism to redress the issues related with proper toilet use like absence of mechanism to monitor the toilet, lack of plumbing and drainage facility, lack of proper consideration of gender based factors etc are equally important.

6.     Adoption of proper design, water efficient models, user-friendly designs and easy to maintain models are essentially need to be given due weightage.

7.     Urban Peculiarity: Though the Urban areas are better placed both in the access to drinking water and also improved sanitation but the problems of water shortage coupled with socio –economic factors and scarcity of space make the problem peculiar and tough for local administrators in Urban Areas (Municipalities and Corporations) and requires a location and issue specific strategy.

8.     The other important aspect that is directly related to sustainable sanitation is the proper disposal of sewerage. In Urban areas where the issue of proper disposal of sewerage including treatment of sewerage and recycling of waste (which is also associated with bio gas production) are to be given due importance.  Same time in rural areas the safe and scientific disposal which includes even reuse of waste for agri-productivity can make a win –win situation for all stake holders of the programme.

9.     As most of the people lacking the toilet facilities are poor and below poverty line, adequate financial assistance either in cash or kind with fool proof disbursement mechanism, less complicated procedures without red-tape, proper monitoring etc. are equally important.

10.  Mothers at home and teachers at school: The role of mother in sanitation and hygiene is most crucial since it is only mothers who is not only   responsible for collecting water and caretakers of sickened family members mainly child due to water borne diseases but as a women she has particular needs for sanitation which makes her position very vital not only in imparting education but also in evolving workable strategy if allowed in decision making processes. Similarly the teachers at school can make a big difference in imparting education for sanitation though it is also ironical that still  about 20 % schools in India lack toilet facilities for girls.

11.  Behavioral Change: Apart from lack of awareness among stake holders about various issues of  Sustainable Sanitation Programme there is need to address the issue of behavioral change which requires to be tackled on top priority because it is not the illiterate and poor who are to be given adequate awareness but in many of the literate communities the well to do and educated people specially male still prefer to defecate in open in spite of having sanitary latrines. In addition to awareness there is need to address the behavioral issues related to sanitation specially open defecation  not only for the individuals but also for the social or political institutions like Gram sabha, panchayats, Khaps etc  where these issues can be addressed once they get social acceptability.

12.  As the provision of financial assistance for construction of toilets is one of the crucial factors for success of programmes there should be a provision of mandatory contribution either in kind or cash. The factors like cost of sanitation improvement and sanitary services including maintenance need to be examined and factored carefully before launching programme at massive scale.

13.  There is need to provide a proactive and supportive platform for the private sector to participate in the programme so that they can become partner not only to assist in capital works but also become partner on operational and maintenance related issues.

14.   As per 2011 survey by the Central Pollution Control Board only 160 out of 8,000 towns had both sewerage systems and a sewage treatment plants. Urban Local Bodies and Panchayats which have been adequately strengthened through 73rd and 74th Constitutional amendments should also be supported  and exhorted  to strengthen themselves through various reforms/initiatives specially for revenue realization which will  provide them opportunities and strength to design, execute and operate desired systems/ interventions.

15.  Proper incentives and rewards to organizations and individuals involved in the programme implementations and initiating new interventions in the areas of proper sanitation and hygiene related programmes should also become integral part of strategy.

16.  The past experiment relating to sanitation programme in West Bengal and Himachal Pradesh helped to highlight the importance of three factors ( also called Toilet Tripod ). These factors  are (1) multi-scalar political will on the part of both government and NGOs ; (2) proximate social pressure, i.e., person-to-person contact between rural inhabitants and toilets;  and (3) political ecology, i.e., assured access to water, compatible soil type, and changing land use  can  play a  crucial  role in the success of this programme.

17.  Last but not the least, a comprehensive strategy and effective policy with due consideration of all above mentioned issues with strong political will to tackle the issue cutting across the regional or political lines will certainly pave way for the achievement of optimum sanitation and ensure better hygienic conditions in the country.
Posted by Mohan Chandra Pargaien at 1/20/2015 08:46:00 PM