TIGERS or TRIBALS: What to choose & what to lose? 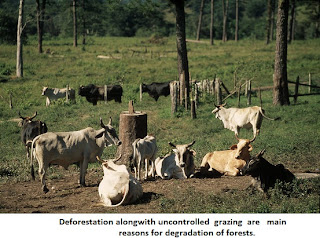 This report has not only generated lot of discussion among the environmentalists, concerned citizens and officials for further depletion of already dwindling resources, same time conflicting opinions are being advocated for this problem.

A few of these are listed below.

1. The main reason for this situation is clearing of forests by local tribals to prove their claim over the forest lands so that they can be benefitted under recently promulgated Scheduled Tribes and Other Traditional Forest Dwellers (Recognition of Forest Rights) Act, 2006. Andhra Pradesh is one of the States implementing this Act very effectively.

2. There are many areas where the felling of mature plantations of Teak, Eucalyptus etc. was also taken up under the approved working plans resulting into display of clear patches in aerial photography.

3. Illegal felling of forest area under the support of leftist or other anti-social elements is also one of the reasons.

Whatsoever the reasons we may cite for the depletion of forests by the local tribals, a candid analysis points at only policy and management of government programmes. In spite of adequate allocation of funds and legal safeguards/supports and protection in the form of reservations and mandatory allocation of funds, the developmental activities and schemes are not percolating down to the lowest and needy individuals for the last 50 years. The lack of access to developmental activities and marginalization of poor in distribution of resources which are the corner stones for a sustainable and environmental friendly development , has only compelled the poor including tribals to exploit the adjacent forests which is only resources accessible to them and from which they eak-out their livelihoods

According to one latest survey under taken up by Chronic Poverty Research Centre (CPRC), there is inequality in the efforts made to prevent people from poverty and get them out of it. The numerous are inadequate and insufficient.

Of the 29 poverty alleviation programmes studied in the survey, only nine could prevent people from falling into the poverty trap. Thirteen could enable escape from poverty and 16 could alleviate chronic poverty. Consequently, says Shashanka Bhide, a senior fellow of the National Council of Applied Economic Research, a significant proportion of non-poor households may fall into poverty while a large proportion of poor may not manage to escape it. The result in case of forest dependent tribal communities, more and more forests are cleared in order to eking out their livelihoods. The poor remains poor for generations. So the question arises when we are not able to improve the conditions of tribals and aboriginal communities in spite of so many interventions/ experimentations , is it possible to conserve the wild -life specially tiger which is an indicator species of a balanced and perfect ecosystem and the tribals are one of the integral parts of this ecosystem ?

When discussing the status of Wildlife particularly the number of Tigers in the Country, tremendous concern for this matter has been shown not only by the media, officials and environmentalists but also by the general public.. Though the currents census of tigers has indicated an improved population of 1706 against the 1411 in 2007. 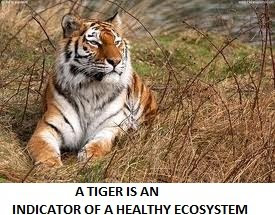 However in case of any incidence of death of a tiger and a leopard to that matter there is genuine response from all sections of the society which is appreciable but the hard fact remains that such concern and response fizzle out very fast. Very quickly we forget these issues be it forests or tigers or pollution.

Rapid urbanisation, multifarious demands of population that is increasing at exponential rate and industrialisation has to follow the rapid and fast mode of development. This developmental process demands exploitation of resources at a rate which is unusually fast. Forests resources of the world had already been easy target of this process. Moreover Forests never had been an important agenda at political parlance. Supposing if all trees would have a voting power then the scene would have been entirely different .The on-going programmes and schemes of the Government aiming at improving the forest cover of the country are not at all sufficient to counter the total impact and pressure of all on-going developmental activities including pressure on existing land/forests for various purposes .Apart from providing a higher budgetary allocation there is need to inculcate a sense and positive approach towards environmental conservation among our policy makers and programme implementing agencies at various levels including forest departments. Otherwise we will be always fighting the battle of survival of forests and tribals at one forum and the dwindling number of tigers at other forum in isolation while the solution is very simple. Conserve and improve the forest resources, it will provide more livelihood opportunities for tribals; such a system will be always conducive for the growth of the tigers, a species indicating the health of a balanced and ideal environment.

(Disclaimer: The views and opinions expressed in this article are exclusively mine and do not necessarily reflect the official policy or position of any agency/government.)