Is Community Cleanliness in India is of very low standards? 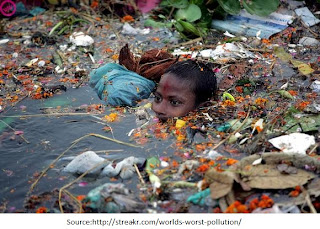 While going through one of the references related to Environment and Culture, I came across one article by Mr. David Leuthold (1989) related to culture and environment wherein he has correlated the reason of lower grade of Community cleanliness in India to its relegating to lower classes in the pa st. He further states that “ ..Hindus were very careful about their personal cleanliness, but had little concern about community cleanliness”. This statement initially puzzled me mainly because someone else commented badly about our Country and its culture. Nevertheless the existing scenario in this regard is also not worthy to refute the above statement. 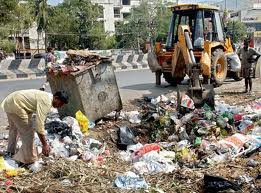 This aspect is more relevant in current situations wherein most of us are not much bothered about the community cleanliness. (Who has the time? a stereotype but acerbic answer).Moreover the changed life style and increased consumption and consumerism have resulted into waste generation of the first magnitude. The situation is more pathetic in Metropolitan Cities including modern multi storied complexes/megacities where the disposal of solid waste (mainly municipal waste) has become one of the burning problems both for the civic authorities and citizens.
India’s urban population which was around 62 million in 1951 has been increased about 5 times in 50 years (285 million in 2001) and likely to cross 500 million by 2021.Such an alarming growth is bound to increase the waste generation especially in urban areas. The present per capita waste generation is estimated to be between 0.3 to 0.6 kg/day which makes our daily waste production more than 1.5 lakh MT and annual production around 60 MT. 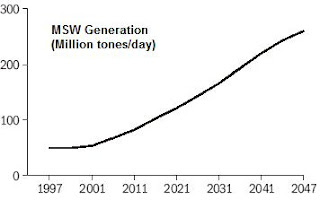 The current trend of population growth is growing to increase the waste generation proportionately and causing a huge problem of waste disposal apart from the pressure on the existing land for its disposal. As per one report,more than 1400 sq. km of land would be required by the end of 2047 for waste disposal only . 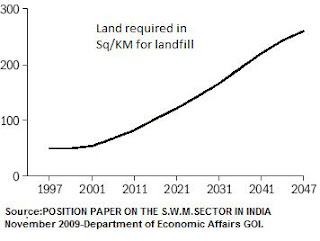 The interesting thing about municipal solid waste is that around 50 % of the waste is of bio-degradable category, so if it is handled with little care and efforts, half of the waste being generated in our cities can be converted into manure by composting. This is possible only by one simple but sensible action of segregating waste at source and its proper disposal. While the first involves the initiatives at individual level starting at home, the later involves proper planning and practices at Municipal level. This should be followed by self discipline of not throwing any kind of waste whether industrial, building or household without proper disposal. Then only we will not be blamed as insensitive towards community cleanliness.
Following simple but practical tips can help further.
1. Generate less waste (reusing and recycling).
2. Take your own bag (Reduced plastic consumption will reduce the problem of disposal).
3. Segregate waste at home.
4. Promote two bin system (one for bio-degradable and other for no bio-degradable like plastics) in your society /colony. 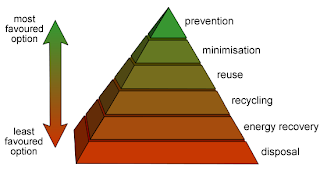