Translocation of Ficus (Bargad) Trees in Hyderabad: A unique Experience

In one of the unique and commendable attempts of conservation of old Ficus( Ficus benghalensis Vat or Bargad (Hindi) Marri ( Telugu) trees in the country, the HMDA (Hyderabad Metro development Agency ) authorities has taken up translocation of Ficus trees in Hyderabad। In fact this large scale translocation was a result of active persuasion of local organizations / NGOs having concern for environmental conservation with active support of media and forest officials who have very aggressively opposed the unscrupulous felling of age old trees specially Ficus which was proposed to facilitate widening of existing roads and provide connectivity to prestigious Outer Ring Road Project by HMDA. Existing roads between Tipu Khan Bridge & A P Police Academy and Narsingi Village which were dotted with magnificent and gigantic Ficus trees were proposed for felling under ORR Radial Road project III. Recently enacted Andhra Pradesh Water, Land & Tree Act (APWALTA) 2002 has also helped the Forest Authorities to ensure the examination and exploring of various alternatives of tree felling by the user agencies before finally granting permission for felling of these trees which were planted during the period of Nizams. 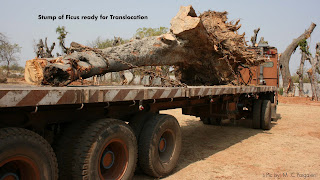 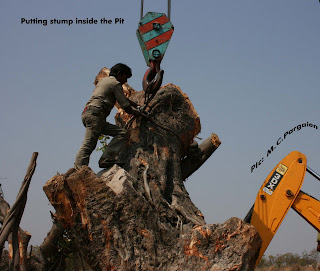 Active persuasion and continued efforts of the local NGOs specially FFBH (Forum For a Better Hyderabad) and Green Hyderabad Campaign of Times Of India Group has resulted into Constitution of District Level Forest Protection Committee by the Government with a view to facilitate re-examine the permissions for tree felling already granted and also examine fresh applications for tree felling and give appropriate instructions regarding transplocation and other issues related to implementation of tree felling as per AP WALTA। The practice of translocation of trees is not very common in our country contrary to western countries where there is great concern for trees among citizen and they prefer and attempt to save as many as trees possible in stead of felling there in not much information and mechanisms available for this cause . Of late the environmentally concerned citizen and organizations/NGOs have started raising their voices for the cause of protection of trees and this has resulted into consideration of this aspect before felling of trees. 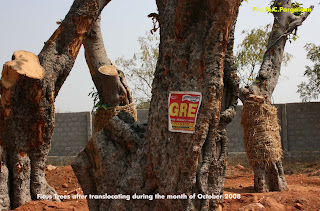 The Forestry Wing of ORR (Outer Ring Road )Project of HMDA has taken up translocation of 220 Ficus trees ( Ficus is one of the best coppicers) । Interestingly one local businessman Sri Ram Dev Rao who is having great care and concern for the environmental conservation has offered his land located 50 Kms away from Hyderabad in Proaddatur Village of Shankarapally mandal of RangaReddy district. Though the translocation of trees has been taken up previously in the Hyderabad but that was limited to one or two trees. However such a large scale translocation that too of trees having girth up to 370 Cms is one of its first kinds in India. 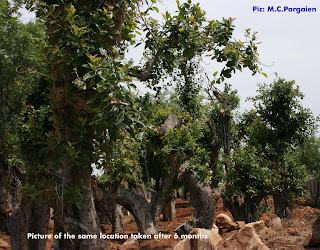 The Forestry Wing has initiated this work during the month of October 2008 by translocating 80 trees followed by 70 Trees during December 2008 and finally 72 trees during the months of January/ February 2009. It was really a gigantic and unique task both for the project authorities as well as the contractor considering the huge girth of Ficus Trees which required lot of advance planning and sustained action to make the translocation successful. 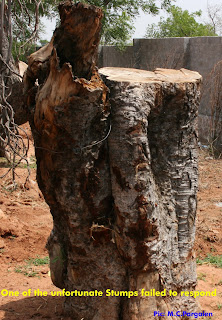 The scene at the site of translocation in Proaddatur village really gives a felling of mesmerization . Once the barren land with hardly few trees in and around is now dotted with huge stumps with copious flush of new leaves coming out of theses Ficus trees. The efforts of Mr. Ram Dev Rao to regularly provide watering and proper care to these trees are worth recognition. Out of 220 trees approximately 25 trees could not respond to translocation and it is likely that a few more may succumb to ensuing hot summer . Howsoever the present survival rate of 90 % in the last 6 months has given a hope and boost the morale of all concerned citizen /organizations. This success is one of the best models for environmentally concerned citizen /Corporate/ Organizations to think the protection of trees in this direction in future and facilitate a way for minimizing the felling of trees in the developmental process. Same time this unique case will provide a good experience for Govt officials to take steps for further improvement in the technique in future.