“They have succeeded in accumulating a greater mass of objects, but the joy in the world has grown less.” ― Fyodor Dostoyevsky ( The Brothers Karamazov)
Of late there has been enormous focus followed by some genuine and concrete actions towards conservation of natural resources for the posterity. The approach of sustainability mainly towards exploitation of resources is not only the  need of the hour but has to be given top priority right from contribution/action at individual level and even compromising  personal satisfaction or little of our greed. One of such non- traditional approaches is the path of enoughism - a concept based on less spending and rational or controlled buying by the consumer. In other words enoughism is just opposite to the Consumerism – a concept based on increasing consumption of goods.
There are diverse and strong point of views both for and against the consumerism. One of the strongest points supporting the consumerism lies in its capability to provide immense happiness and feeling of possession.
Continued development of human knowledge which resulted into improved technological interventions has not only facilitated the delivery of diverse goods for daily uses albeit at a very fast rate of exploitation of resources  but also helped to provide an immense services for  the mankind. A report of the World Watch, 1989 estimates that world’s people have consumed as many goods and services since 1950 as all the previous generations put together.  This has same time allowed the businesses to grow and economies of the Nations to proliferate like anything. The darker side of this has been the degradation of environmental conditions and scarcity of resources especially nonrenewable ones.
The developed countries having witnessed the best of material growth have now started to explore the alternatives and ways for the conservation of resources. Enoughism is now becoming the talk of the town and one of the approaches towards this.
India with its rational approach towards the utilization of resources has been the crusader for the environmental conservation since times immemorial. The biggest living example of this was Mahatma Gandhi who was known for his simple life style and contained needs (a simple dhoti and a wooden sandal) .Mahatma Gandhi like a practicing environmentalist realized the importance of environmental problems and sustainability which we are facing today. That’s why he cautioned us to be careful about the use of resources which are sufficient only for the needs of the human beings and not for the greed. 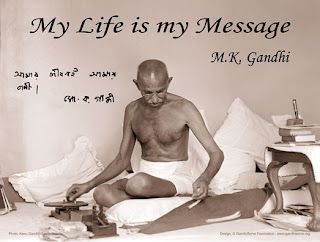 It has been now realized that though there have been the availability of greater choices and access to vide range of goods due to economic growth but this does not necessarily brings more happiness. In such a case the practice of grading the Nations based on the economic parameter like GDP is nothing but a step to maintain the economic preferences duly according less priority to issues like environment and social well-being. Considering the farsighted goal of sustainability of resources, the blind adoption and support of materialistic approach can only be ephemeral in long run. The conventional approaches of conservation of resources have not been really very effective due to various/ obvious reasons and major one being the  step motherly treatment and lackadaisical attitude among policy makers and planners .  Entry of other non-conventional interventions like enoughism and moderating our life style which may not be easy to follow but once adopted have the real and log lasting solution for a sustainable life style.
Let’s resolve today by taking a pledge that we will moderate our consumption and will allow our inner conscience to act instead of being influenced by marketing gimmicks of advertisers. Let happiness not be judged and weighed by what you possess physically.