The latest study conducted by the psychologists of Northwestern University relating to consumerism confirms the vanity of human wishes including materialism and consumerism. (http://www.psychologicalscience.org/index.php/news/releases/consumerism-and-its-antisocial-effects-can-be-turned-onor-off.html ).The research shows that that people who place a high value on wealth, status, and stuff are more depressed and anxious and less sociable than those who do not. Apart from above worthlessness of these values which are on the top of the wish list of every one in today’s world, the Consumerism and materialism influence the human attitude to act in a ways which are less ecologically beneficial and indirectly force human being to behave in less social manner.

"The more we consume, the happier we will be. Or so we like to believe. But for the planet, it's disastrous." - George Monbiot . 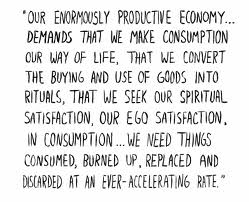 The simple indicator reflecting the surging economic growth of developing countries including India is the number of millionaires and Billionaires. There were 85000 millionaires in India in 2005 which rose to 153000 in 2011 apart from having   55 Billionaires (2011).  However on the other side we are witnessing the continued degradation of environmental conditions, over exploitation , social unrest, corruption and other socio-environmental problems. These offshoots of growing economies are one of the major challenges which the developing countries are going to face in coming years.

So we have a bigger question to ask.

What kind of life style we shall adopt?

One that is full with high materialistic value, consumerism and supporting exploiting of resources unmindful........
or
the one that is socially just, responsible, environmental friendly and rational in  consumerism..
Posted by Mohan Chandra Pargaien at 4/20/2012 02:49:00 PM