Where our water sources have gone ? 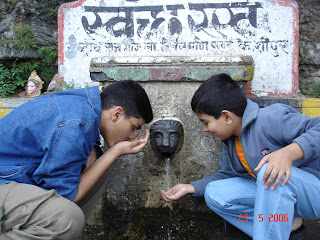 Effect of development, deforestation and industrialization have contributed a lot in depletion of water resources of the Country. This problem is more acute and visible in hilly areas where the Womenfolk are affected mainly due to this problem. I remember while going to Hanumangarhi ( a place 4 km away from Nainital on Nainital- Haldwani road where this temple was established by Sri Neem Karauli Baba ) during my intermediate days (1979-80) we used to drink fresh water oozing out from springs found in abundance all along the road .We were told that British have provided a nice mechanism to facilitate the flow of water from such springs by providing a metallic outlet having a shape of animal mainly Lion.

While traveling on same road during summer of 2006 I was quite surprised with joy and ecstasy to see one of such springs still giving water. My sons Lokesh and Sanket were quite amused and enjoyed drinking water from this natural source of mineral water.
Posted by Mohan Chandra Pargaien at 1/26/2009 04:05:00 PM